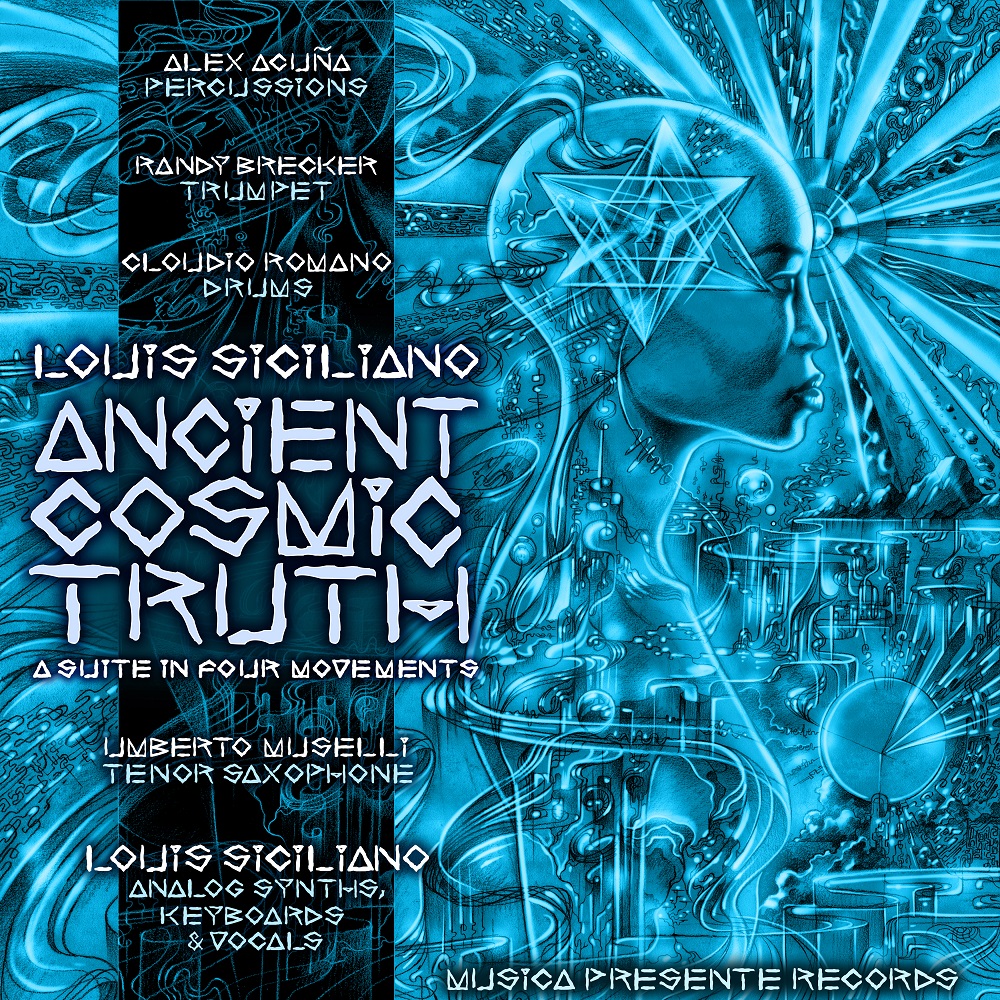 The new EP Ancient Cosmic Truth from Louis Siciliano ranks as his best collection yet. It’s only four songs, but Siciliano and his cohorts accomplish more over the course of those four songs than many comparable or subjectively more talented musicians pull off with much longer releases. The underlying ambition of these performances is unmistakable. Despite the ambition, however, Siciliano never bites off more than he can chew, and his writing keeps a resolute commitment to never tax the listener’s patience. Anyone expecting long, winding compositions will either be disappointed or else breathe a sigh of relief because these are concise and to-the-point compositions free from any self-indulgence.

The lack of self-indulgence is clear from the beginning. “Bambara’s Symmetries” is fully functional, never ornamental, and the musical delivery utilizes the full breadth of each musician’s talents. Siciliano’s synth work stands out during each of the EP’s four songs and the opener is one of its most involving moments. It spares the listener nothing. Drummer Claudio Romano and percussionist Alex Acuna, formerly of Weather Report, introduce themselves with a resounding rhythmic, even melodic, performance. There’s intention behind every note and the cut never meanders.

“Translucent Dodecahedron” shares similarities with its predecessor, but otherwise branches off in a much more daring direction. The twin rhythmic attack of percussionist Alex Acuna and drummer Claudio Romano hit an early zenith here as their near tribal drumming gives the song an eternal quality missing from much of the music today. Balancing the primal and cerebral is an art and Siciliano captures it with the aid of his compatriots. It’s a dazzling demonstration of their skills that they so ably mix different textures without losing the song’s essential core. It announces itself time after time during the song and melody is never far away.

“The Secret of Mansa” has a much different thrust. The use of sound effects during the song’s introduction is our first sign that Siciliano’s intentions are much different here than elsewhere on the EP. It shares the same influences, but they manifest themselves in an unique way. It requires immense artistic dexterity to vary your approach in such a way without jarring listeners. “The Secret of Mansa” carries that out while adhering to the template they established with the first track.

Siciliano closes with the EP’s title song. “Ancient Cosmic Truth” reaches for a new mode of expression beyond traditional jazz and the accompanying experimentation defining the genre over the last 4+ decades. It’s the EP’s most ambitious lunge for greatness and the chemistry shared by the five musicians carries it over the top. Romano and Acuna earn a place in the spotlight once again, but the entire five piece push this song into a new realm where all bets are off and we hear music that is familiar, yet new, and indelibly human. It’s a bold conclusion to an already invigorating release and signals Siciliano’s continued willingness to venture beyond the rote. Louis Siciliano knows this music well and he’s determined to carve out a place for himself and his art.