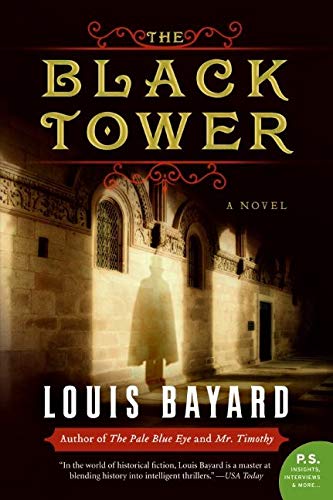 After writing two witty novels about gay life in Washington, D.C., Louis Bayard hit on a winning formula with his 2003 novel, Mr. Timothy, which starred Dickens’ Tiny Tim and gave the character a complexity that was sorely lacking in the original. He followed that up with The Pale Blue Eye, a story of Edgar Allen Poe’s time as a cadet at West Point that earned an Edgar Award nomination. Now, Bayard turns his attention to the turbulent French Restoration. The Black Tower puts legendary French policeman and ex-con Vidocq (the inspiration for Victor Hugo’s Jean Valjean) together with medical student Hector Carpentier to find out what really happened to the son of Marie Antoinette and Louis XVI.

A clue in a dead man’s pocket leads Vidocq to Hector, whose late father, a doctor, treated the Dauphin during his imprisonment. Though records show the boy died in the tower, a long-lost diary and a murderer who seems to be stalking Hector and anyone else with a connection to the boy-who-should-be-king indicate otherwise. Could Charles Rapskeller, a young man with an affinity for gardening, really be Prince Louis-Charles?

Bayard has a particular talent, also displayed in Mr. Timothy, for evoking the poignancy of the longing for a lost father without being overly sentimental. In the years following the Dauphin’s “death,” the senior Carpentier became closed off from his family and friends, and it is only by reading his journals that Hector discovers how much he was loved by his father. Though he and Charles are close in age, Hector finds himself taking over his father’s role as Charles’ protector, while Vidocq goads him on in pursuit of definitive evidence of Charles’ royal lineage.

In his previous novels, Bayard has had the courage to keep the ending honest—as in life, not every loose end is left neatly tied. The Black Tower is no exception, and it includes a final twist that will leave even the closest of readers flipping back through the pages to find clues they’ve overlooked. A perfectly balanced blend of compelling characters, elegant writing and spellbinding plot, The Black Tower will keep fans of historical fiction riveted.

How the Creator of “My Year of Dicks” Is Manifesting an Oscars Moment for Channing Tatum
James Gunn Unveils His New DCU Slate With Reboots of Superman, Batman, Green Lantern and More
Sen. Ted Cruz Refuses to Apologize to Paul Pelosi For Attack Conspiracies
The King of the Hill Revival Is Finally Happening
The Best of the Best Hotels & Resorts in the Hospitality Industry