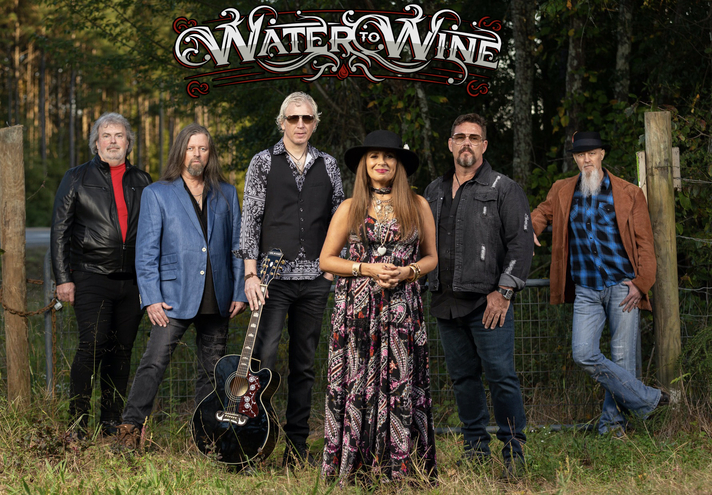 Equal parts blues swing and old-fashioned country melodicism, the hook-powered “Chillin’ with Me” keeps one foot on either side of the artistic borderline but ultimately feels like a bright piece of Americana. It’s not the only such hybrid you’re going to hear in the new album A Señorita, A Sweet Tea and A Few Good Songs by Water to Wine, and although this is only the first LP this band has released together, it doesn’t seem like they’re having a hard time finding their sound. From the moment we press the play button on “Sing You a Song,” they’ve got a gelled intensity that gets stronger with each beat, confirming that their chemistry isn’t the product of a wise production scheme but instead that of a natural kinship only known among true blue-collar musicians.

“That’s What I’m Talkin’ About,” “Hero,” “Good Time’n,” and “Sisters and Brothers” have the greatest country music hue to their construction while “We’re Gonna Have a Big Time,” “It’s All Good,” “What Kind of Fool,” and “Water to Wine” are a bit more rock n’ roll-oriented, but the way the material meshes together is something too brilliant to ignore. Although it’s true that there’s a lot of interest in southern rock right now, this isn’t following that trend – the imagery is too bucolic whilst the sonic depth is too great and bar band-influenced to be dismissed as a surface-level feature. I don’t think Water to Wine wants to fit in with their peers, but instead create their own narrative through action rather than scene politics.

Cosmetic elements never feel like the focus in A Señorita, A Sweet Tea and A Few Good Songs, which isn’t to say that songs like “What Kind of Fool,” “Sing You a Song,” or “Chillin’ with Me” are somehow missing a radio-ready varnish. On the contrary, it’s the texture and tone of the instrumentation and our dueling lead vocalists that shape the true story of this album more than any deliberate acts of virtuosity, or even physicality, do. I don’t know how they do in a live setting, but if they can bring the same passion into a concert that they have for this initial slew of songs, I think they’re going to have an easy time getting in on the Americana revival movement as it’s growing on the live circuit in 2022.

A Señorita, A Sweet Tea and A Few Good Songs is admittedly more harmony-driven than it is defined by structure or even a sophisticated take on the best elements of country and rock music, but for those of us who are just looking for a solid set of riffs and quality lyrics that don’t ply us with the same old poeticisms we’ve heard a hundred times before (in just as many settings and styles), Water to Wine are a band that needs to be given a lot of attention at the moment. They’ve got a quality collection of tracks in A Señorita, A Sweet Tea and A Few Good Songs that suggests ambitions extending well beyond what the Nashville establishment would ever allow for right now, and if they can keep this momentum going, it’s going to be hard to compete with their potential.