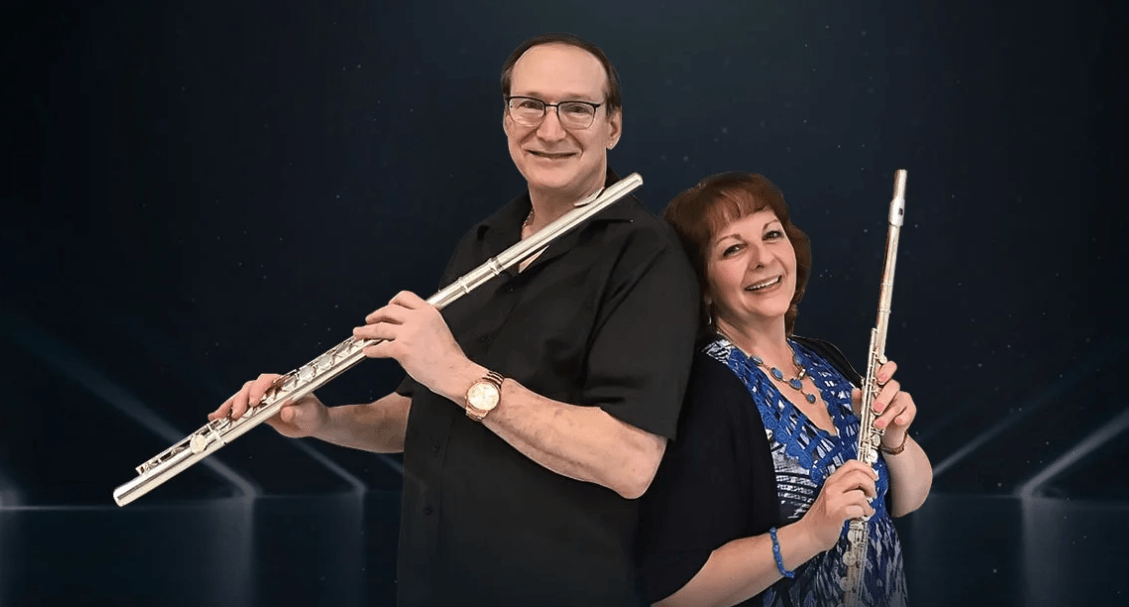 Released in 2003, “Collide” from Howie Day is still a mainstay on adult contemporary radio stations across the globe. The touching ballad is the focus of the new cover from flutists Steve Markoff and Patricia Lazzara. The former student and teacher combo, both from New Jersey, are delightfully in their zone in this special ode to a song about chance, about beating the odds.  The song features Allison Brewster Franzetti on piano. The keys add yet another layer of effervescent energy and warmth. Chances are that the synergy this song creates will indeed take the listener to an amazing new level.

While the actual lyrics are missing, this version of “Collide” is emotionally riveting. The flute sound is an interesting choice and I think it really works here. Taking on the role of the vocalist, the flute arrangements are meek. I never felt like they were throwing off a passive sound, more of an earnest projection. The piano, ever present but certainly shines the spotlight more on the flute arrangements, is elegant. The keys sound what it might be if you could hear clouds moving above you on a perfect day. I felt awash with light and love.

The flute is also a key choice to interpret this song because of it’s modesty. It’s lovely and dainty. I’ve always felt like “Collide” has a meek way about it. As the song flows, the progressive spirit opens up and the protagonist gains courage and confidence because of the other person. You hear that when the two flutes come together. It’s bolder and grander of a sound. I loved the way they tip-toe around each other. It’s just as poetic as if there were lyrics. If you listen closely, in your mind, there are moments of sighing…those tiny droplets of exhalation we have when we’re so smitten or so endeared to another. I heard that in the flute arrangements. You really do feel the love these artists are giving – they aren’t just reading notes and performing those notes from a page. I really felt their enthusiasm and connection to the song. I’m certain other listeners will feel the same.

“Collide” is the perfect song for a first dance. It’s also an ideal song to just listen to, escape to on a Sunday afternoon that calls for just hanging around in the sunroom. Or a rainy day. The romanticism and the dreamy tones are enviable. Markoff, Lazzara and Franzetti proved to be quite the team. “Collide” joins several other projects and tracks from the trio. In 2019 they released the excellent Timeless – Hits of Love and Hope from Pop, Rock & Soft Rock, which features 18 fan-requested tracks. Among the standouts of that album are “American Girl” (Tom Petty & The Heartbreakers), “Yesterday” (The Beatles) and “If You Could Read My Mind” (Gordon Lightfoot). In 2021, they released Romances In Blue, which included the charming “If I Could Reach Your Heart”. “Collide” is slated to be included in the June 2022 album release.

The music of Steve Markoff & Patricia Lazzara has been heard all over the world in partnership with the radio plugging services offered by Musik and Film Radio Promotions Division.  Learn more https://musikandfilm.com

Photo Showing Eric Holder’s Injuries Surfaces Following Brutal Attack By Inmates While En Route To Trial For Murder Of Nipsey Hussle
See Where Stranger Things’ Demobats Fall in Our Ranking of the Monsters
Book Riot’s Deals of the Day for July 3, 2022
5 Daring Date-Night Outfits to Try
6 Things to Remember When Buying a Vintage Car