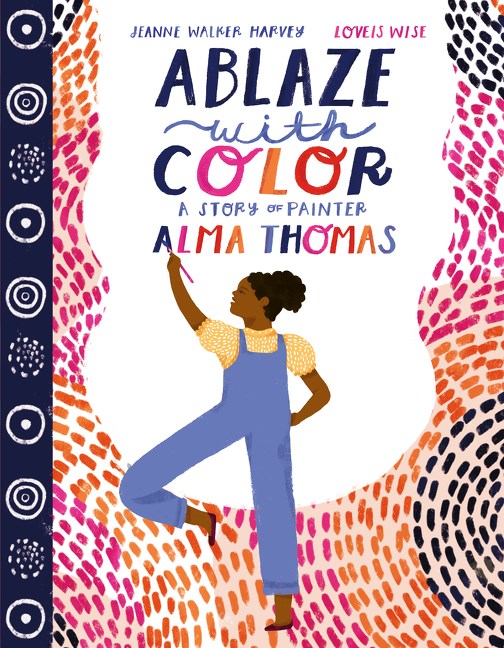 Young readers who love to paint, sing or write—or just enjoy reading about the fascinating lives of creative people—will find plenty of inspiration in these three biographical books about Black women who made their marks in the fields of visual arts, music and literature.

Author Jeanne Walker Harvey was inspired to write the picture book biography Ablaze With Color: A Story of Painter Alma Thomas after learning that the Obamas were going to display Thomas’ painting “Resurrection” in the White House. The first work of art by a Black woman to receive this honor, the painting was given a prominent place in the mansion’s Old Family Dining Room.

Harvey traces Thomas’ early life as a creative, inquisitive child in 1890s Georgia, where her parents hosted salons for intellectuals to make up for the lack of vibrant educational possibilities in the segregated South. Later, Thomas’ family moved north to find greater opportunities for their daughter, and Thomas began a long career as an art educator in Washington, D.C.

Remarkably, Thomas didn’t pick up a paintbrush and begin focusing on her own art until she was around 70 years old. Her dynamic paintings, many inspired by space exploration and the solar system, were quickly celebrated and selected for exhibitions at the Whitney Museum in New York City and the Corcoran Gallery in Washington, D.C.

As the book’s title suggests, Harvey’s text celebrates Thomas’ lifelong love of color, and the book’s illustrations by Loveis Wise reinforce that theme. Every page is full of rich shades of gold, green, red and other saturated hues. Some of the illustrations envision scenes from Thomas’ life, while others pay homage to Thomas’ own artistic style and inspirations.

Ablaze With Color will encourage readers to learn more about Thomas’ amazing works of art. The book’s back matter includes a timeline that juxtaposes significant events in Thomas’ life against notable developments in American history. A list of museums with online and in-person exhibits of Thomas’ work will make it easy for readers to see more of her paintings for themselves.

Author Hanif Abdurraqib is best known as an award-winning poet and cultural critic thanks to his writing for adults, but in Sing, Aretha, Sing! Aretha Franklin, “Respect,” and the Civil Rights Movement, he turns his attention to a picture book biography of one of the most celebrated voices of the 20th century: Aretha Franklin.

Abdurraqib begins by discussing Franklin’s roots and the time she spent singing gospel in her father’s church. He devotes most of the book, however, to tracing Franklin’s connections to politics. She joined Martin Luther King Jr. on a civil rights campaign tour, and her song “Respect” was widely adopted as an anthem by the civil rights and women’s movements. Readers who are only familiar with the song from the radio or at karaoke nights might be surprised to learn about how the song galvanized civil rights marchers even as the struggle for Black rights grew increasingly dangerous: “Sometimes the right words and the right sound could open a window and let a small bit of freedom through.”

Ashley Evans’ digital artwork depicts key moments from both Franklin’s life and the history of the civil rights movement with bright colors and simple lines. She also illustrates more contemporary scenes, such as a Black Lives Matter march and a young Black musician at a keyboard, to demonstrate how Franklin’s influence continues to inspire present-day artists and activists.

While young readers might only be familiar with Franklin through her most famous songs, Sing, Aretha, Sing! positions her as a pivotal figure in American popular music, one whose political and cultural influence goes far beyond her familiar hits.

An inventive biography of the influential science fiction writer Octavia E. Butler, Star Child: A Biographical Constellation of Octavia Estelle Butler is intended for older readers but touches many of the same themes as Harvey’s and Abdurraquib’s books.

Author Ibi Zoboi focuses primarily on Butler’s early life. She describes Butler’s childhood during the 1950s and her initial creative pursuits, and traces intersections between Butler’s experiences and broader historical events and political and cultural issues of the time, from the Cold War and the space race to the beginnings of the civil rights movement. Zoboi also explores the obstacles Butler faced as she grew up and started writing. Butler contended with structural racism and grappled with a literary and educational establishment that didn’t take Black women’s writing seriously, particularly the kind of science fiction and fantasy literature that Butler was creating.

Zoboi, who is best known for her award-winning young adult novel American Street, alternates straightforward biographical narration with sections written in verse that utilize a variety of poetic devices to delve deeper into the factors that shaped Butler’s life and work. The book also includes numerous archival photographs and documents as well as quotations from Butler’s writing and interviews.

Zoboi movingly highlights the importance of empathy in Butler’s work and her role as a mentor and source of inspiration for countless other Black creatives—including Zoboi herself. The book’s final chapter describes Zoboi’s interactions with Butler over the years, from a book signing in Brooklyn, New York, to time spent as her student at the Clarion West Science Fiction and Fantasy Writers’ Workshop in Seattle, Washington. This personal connection makes Star Child even more compelling. Although readers of this biography might be a little too young to read Butler’s work for themselves just yet, Zoboi ensures that they won’t forget her name.

These 30 Secrets About Stranger Things Will Turn Your World Upside Down
DJ Drama Defends Jack Harlow Against PETA Accusations
Book Riot’s Deals of the Day for June 30, 2022
Brittney Griner’s Trial Finally Has a Start Date
The New Sporty 2022 Lexus SL 500