Dear Lamborghini Countach,
I’m writing to inform you that you are no longer my dream car. You probably don’t remember me, but I won a poster of you at a fair in 1988 and put you on my wall next to Cindy Crawford. You were my first dream car, which I’ll admit is a silly term that I haven’t used since I grew out of having car posters on my bedroom wall. Nevertheless, you’ve now been replaced by the Mercedes G. 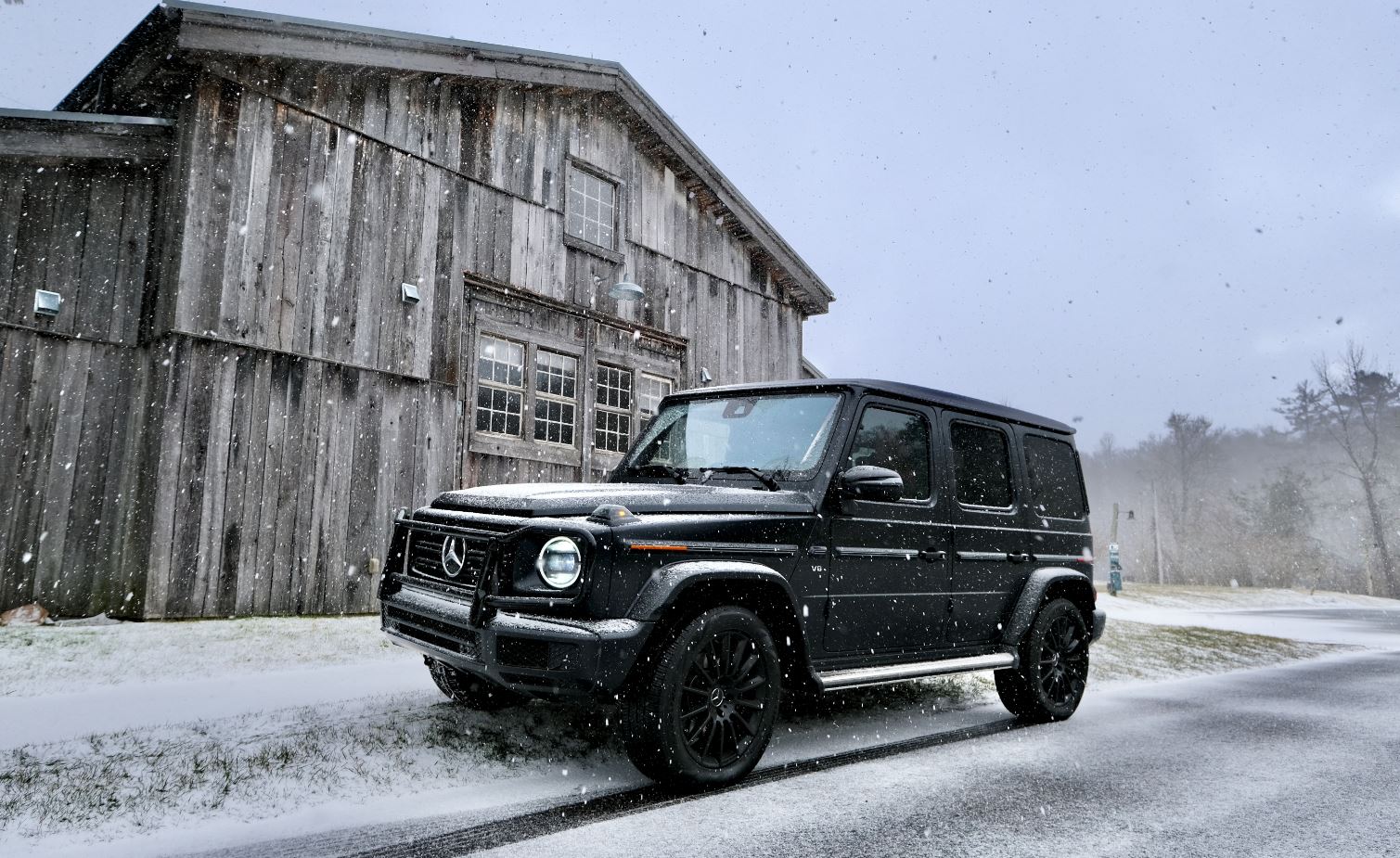 Three things will stick with me most about my time with the Mercedes G550. The first is that I’ve never heard more people tell me, “That’s my dream car.” It’s even the dream car of people who don’t seem into cars enough to have a dream car. Second, I’ve never driven anything that elicited such a universal response from male motorists: they all wanted to race me. I was cruising in the right lane minding my own business, thinking more about my fuel gauge than performance. And yet to them it was as if the G550 merely being on the road with them was an act of aggression; a threat to their manhood… or something. They all made a point to pass me at senseless speed, then their brake lights came on a half-mile ahead, once they’d proved their point. Third and finally, I never imagined that a car that looks so hard, could be so smooth. 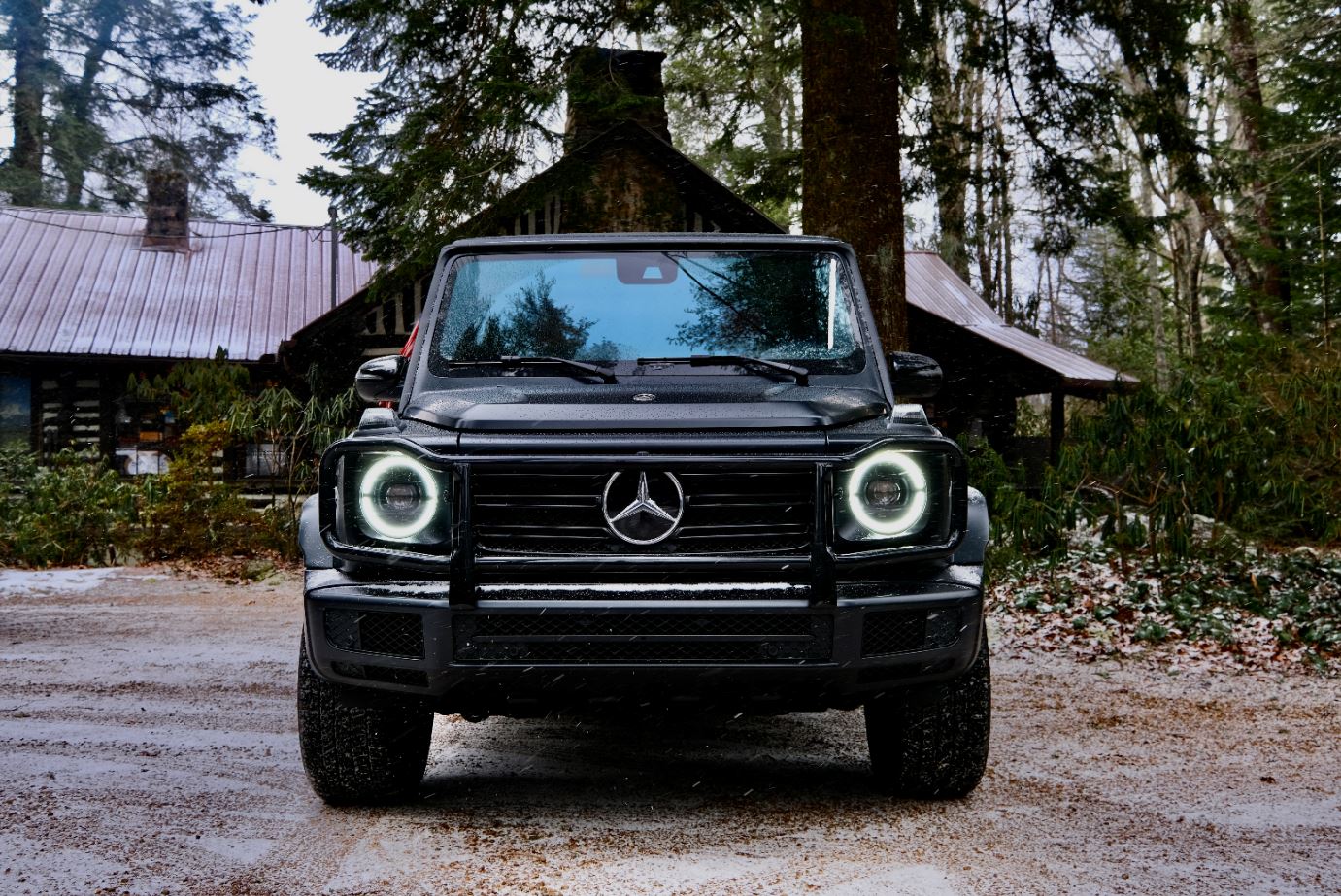 The G is an abbreviation of Geländewagen (literally, off-road vehicle). The first one was made in Austria in 1979, but it would have a long path to the U.S. market. Some may recall that the Pope rode around in a custom G Wagon fitted with a plexiglass viewing pod in the 80’s. The original interiors were pure function, and they didn’t start getting fancy until the 90’s, around the time they started trickling into the United States via a third-party importer. It wasn’t until 2001 that Mercedes began directly importing the G-Class into the U.S. I tended bar at the Château Marmont on L.A.’s Sunset Strip in the early 2000’s, and the first one I ever saw belonged to Green Day bassist Mike Dirnt. It still handled like a utilitarian vehicle at that time, and didn’t become the luxury jack of all trades SUV it is now until a 2018 makeover. Today, the G leaves little, if any, room for improvement––until the Mercedes engineers manage to pull off an electric version. 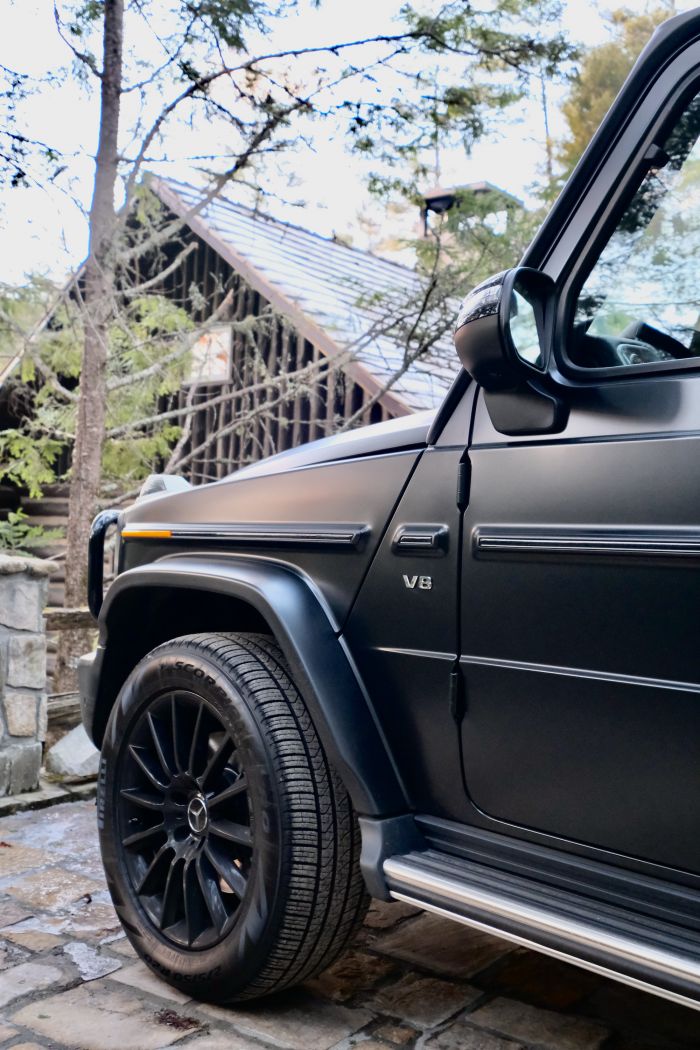 The matte black color of the model I drove made me feel like Batman on safari. I find matte black to be generally obnoxious as a car color, but somehow it almost toned down the in-your-faceness of the G550 in a nice way. Or at least, that’s what I told myself.

I don’t think I need to say much about the iconic angular looks of the G-Series, but I will point out a few specifics that you only really notice in person. First of all, the doors close with the sound of shutting a vintage refrigerator. And you have to shut them with real purpose to get a tight seal. They feel like a tip of the hat the to the G-series’ utilitarian roots. Also, the circular running lights around the headlights, and the way the Mercedes emblem lights up on the front grille are particularly dramatic flourishes in person. The G also sits much higher than you’d expect, and I found myself really using the handles in the window frame and on the dashboard when getting in. On the road, you’re almost shoulder-to-shoulder with truckers. 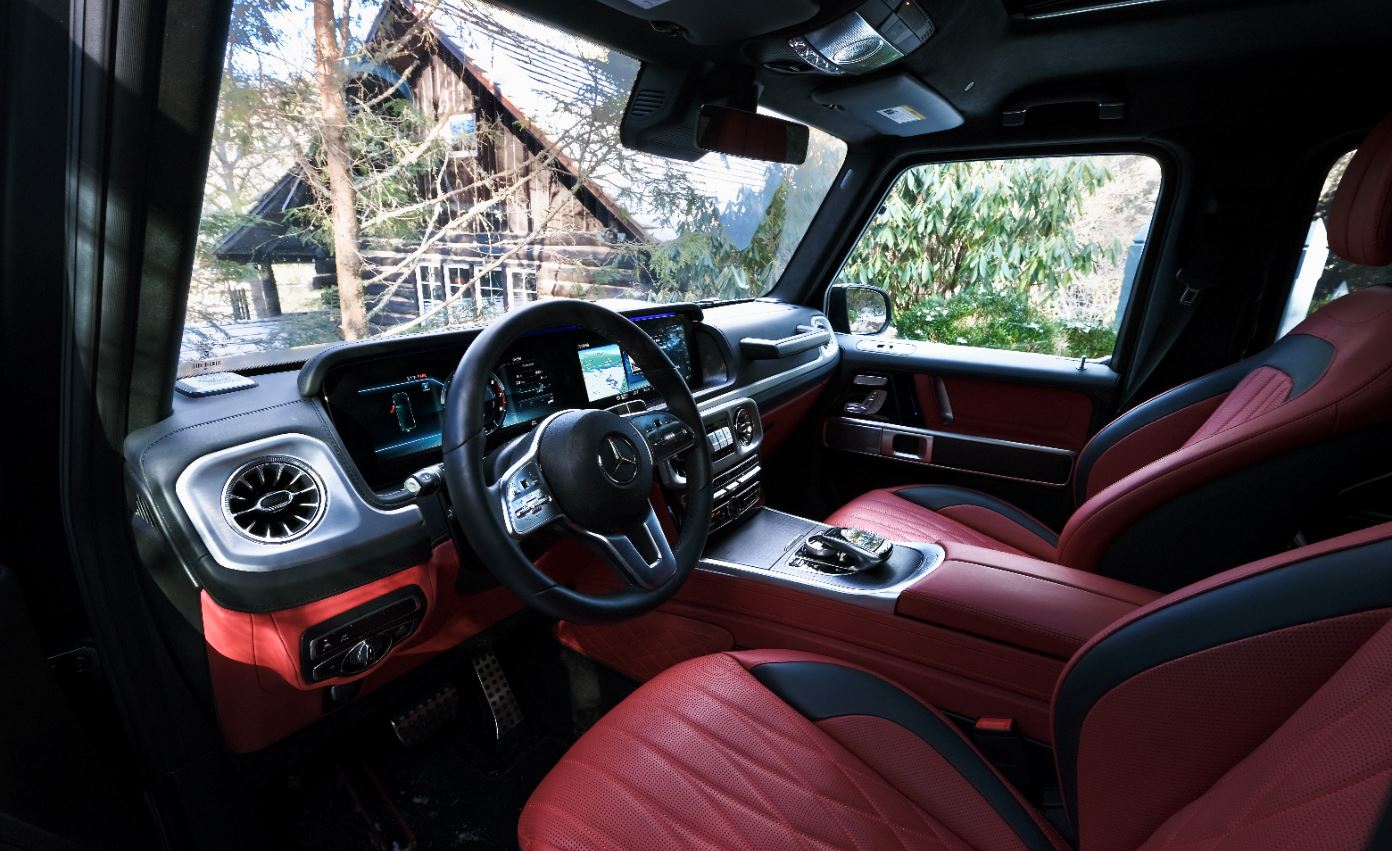 The interior of the G550 is one of the most stunning I’ve seen. The first detail you notice are the circular metal air vents, with slats orbiting the center like hour indices on a watch. As someone who’s never given much thought to air vents, these are the prettiest ones I have ever seen. Red is generally garish as an interior color, but the perforated red leather seats of the model I tested was a nice counterpoint to the matte black exterior.

The touchpad hovering over a knob on the center console took some getting used to, as did the entire media interface. A single, uninterrupted dashboard screen acts as both the instrument cluster on its left half and the media interface on the right. The former can be customized with three different configurations, which I enjoyed tinkering with. The gear shift where you’d normally find the windshield wiper lever was an adjustment, and once or twice I accidentally shifted into neutral when I meant to turn on my wipers. The heated Nappa leather steering wheel was a nice luxury in the cold weather, and I’ll also give special mention to the sleek frameless rearview mirror.

It is a very tall vehicle, but not a particularly long one. So, while there is a lot of vertical space inside, there’s less horizontal space than I expected. In the shallow but tall cargo area, packing for a trip is a bit like setting up a game of Jenga. 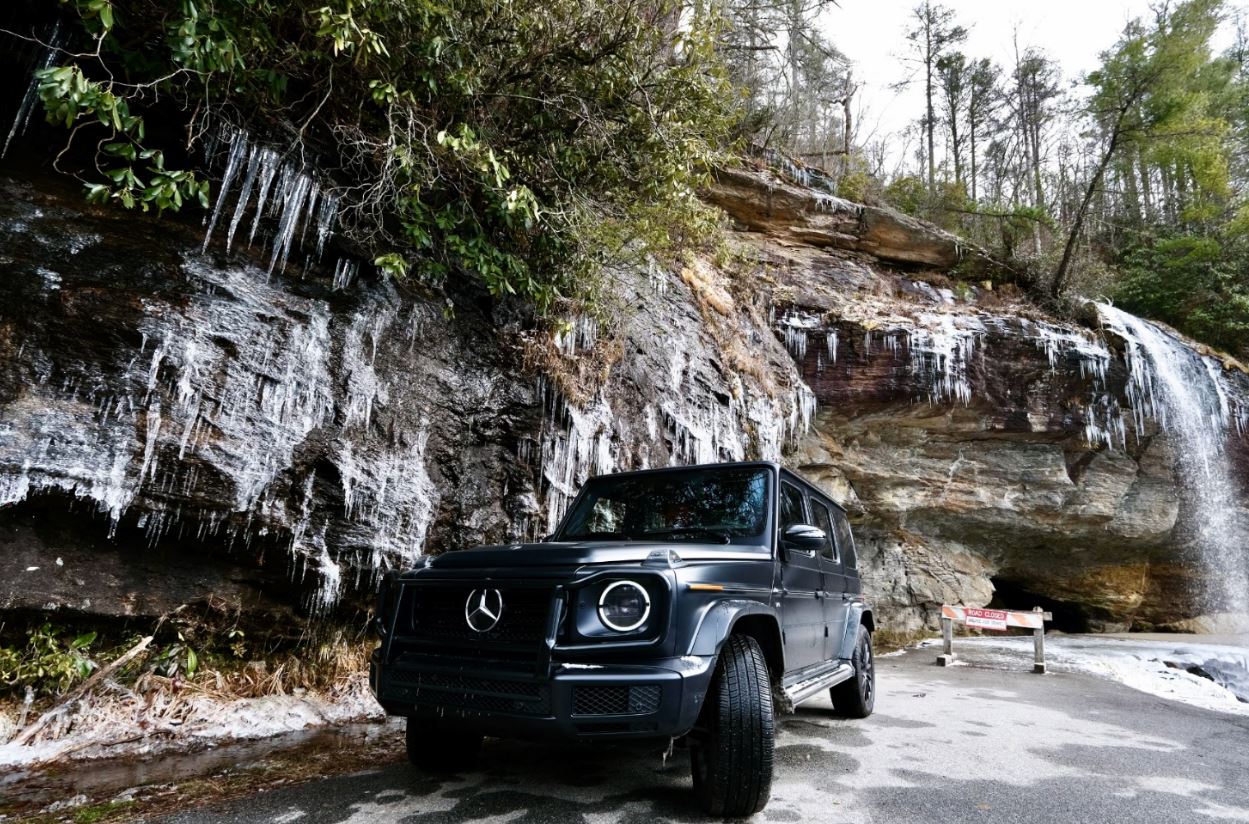 Firing up this engine is an event. The first time I did it, my daughter was standing in our front yard and started crying. The ground shook. It’s simply an ignition that is impossible to take for granted, and it gives you a little thrill every single time.

When I first found out I’d be driving the G550, I made plans to go to the North Carolina mountains. Because I knew this was a ship I could not keep in harbor. On the freeway, it floated comfortably. And on the 7% incline of the Saluda Grade mountain pass, the 416-horsepower V8 was utterly unfazed.

For a vehicle with the aerodynamics of a Rubik’s Cube, the G550 always seems to have power and speed to spare. The twin turbos are configured inside the “V” of the engine, so that the path to the cylinders is minimized and turbo lag is imperceptible. It’s hard to imagine the extra 161-horsepower of the AMG version not feeling like overkill, but then again, I suppose the overkill is the goal to many.  Personally, I enjoyed the extra few miles per gallon and never wanted for speed.

My first day in Highlands, North Carolina, the highest incorporated town East of the Rockies, I was gifted with a snowstorm that let me experience the all-terrain dominance of the G550. We were staying on an unpaved road that was quickly blanketed with snow, and the G––particularly this one upgraded with adaptive suspension––negotiated anything I put it through with one hand tied behind its back. It is a very comfortable car to drive on the road, but any time you venture off the pavement, you’re instantly reminded that it is a serious off-road machine. If a Jeep comes into its own when you take it off-road, the G simply goes from great in one way to great in another.

With the options tallied up––like the 12k exclusive interior package, the AMG Line exterior styling, the widescreen instrument cluster and the adaptive suspension, among other add-ons––the G550 I took to the mountains came with an MSRP just north of 158K. Which would lead me to believe that the G-series is an emotional purchase, even for those who can comfortably afford one. But of all the cars I’ve driven as a journalist, this G550 was an absolute highlight. And I look forward to dreaming up an excuse to drive one again, in different terrain, as soon as possible. 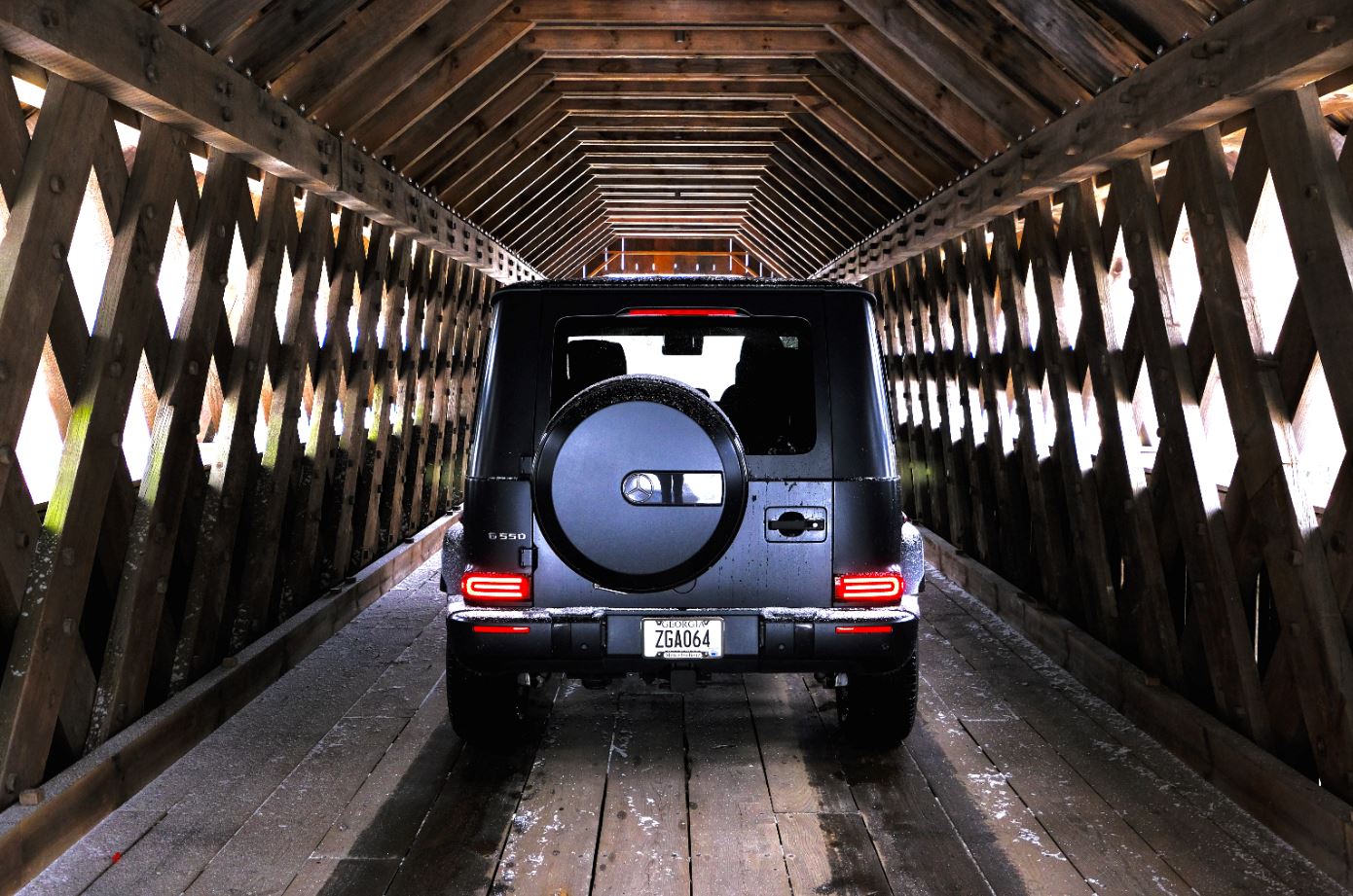 ALL PHOTOS COURTESY OF:  Stinson Carter