Israel is “A land of wheat and barley, of vines, figs, and pomegranates, a land of olives and honey.”  And now, whisky.  The Promised Land and Judean hills have a malt scene.

Because of the climate, a three-year Israeli whisky will have the intensity of a ten-year-old from Scotland. High temperatures accelerate the distilling process. When it’s hot, whisky is absorbed into the barrel. When cold, it moves out, creating rapid extraction and a nuanced flavor profile.

The first Israeli whisky – the now-defunct Ascot Special Deluxe Blended Scotch – came out in 1971. There are now three main single malt distilleries in Israel – Milk and Honey, Golan Heights and Pelter, run by Tal and Nir Pelter in Ein Zivan, and making a whisky aged in Matar winery casks in an ancient bunker.

David Zibell, a former real estate broker from Montreal, is the owner and head distiller of  The Golan Heights Distillery at Katzrin. His single malt release was a single cask bottling from a Cabernet American oak first-fill aged 3 years, mashed from concerto barley with Golan water, and double distilled in copper pot stills worm tub condensers.

Types of wood used all contribute towards the rich and unique flavors of whisky from Israel. Used are Islay, Laphroaig, and Ardbeg barrels, along with Jamaican rum, red wine, Sherry, and STR (shave, toast, re-char) wine barrels that have had their interior lightly shaved away before re-toasting, creating a cask combining elements of both re-used wine casks and virgin oak. 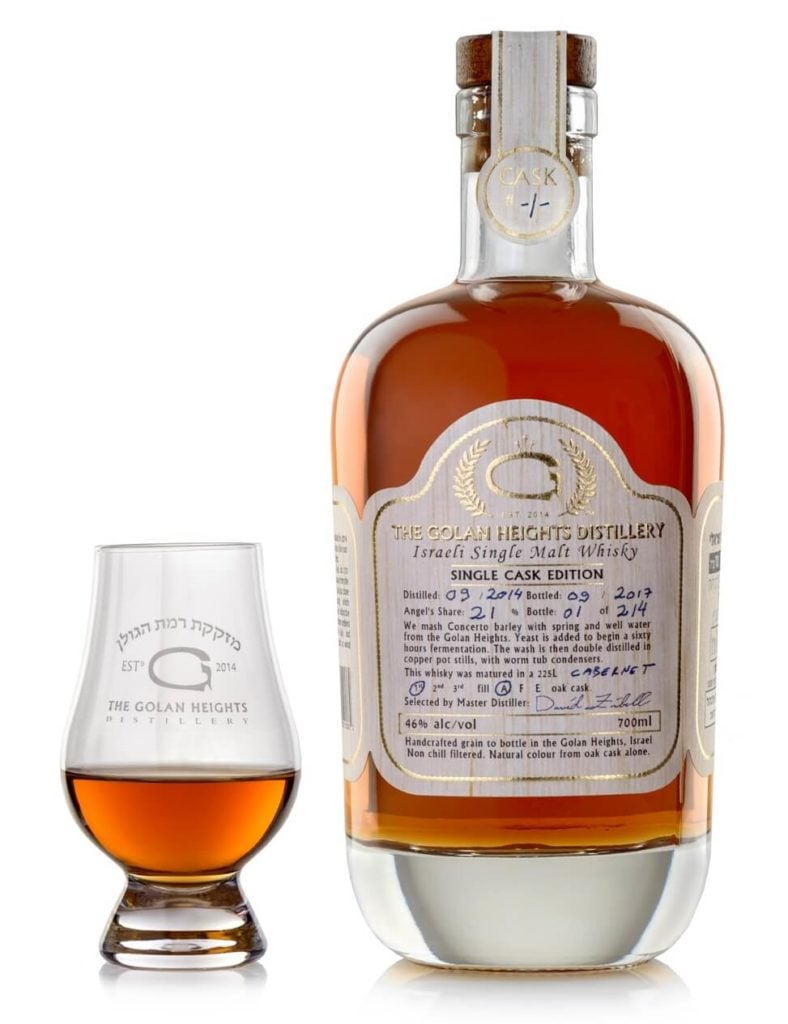 Says Zibell:  “For Golani Black, the two-grain whisky is aged in new charred American oak barrels charred at the distillery. There is also a sweet version, Golani maple. For Rosh Hashana, we do a honey whisky.”

Zibell’s limited-edition Brewer’s Whisky, “Spicy Hummus,” is made from distilled Israeli chickpea malt ale from the Meadan Brewery, known for its gluten-free, Passover-friendly beers. The beer is distilled, then aged in charred oak casks that previously carried Golani Black.

Says Dawn Davies, head buyer at The Whisky Exchange: “Milk and Honey are just one of the distilleries producing whisky in Israel with a delicious fruit-forward style and playing around with different cask finishes.”

“M&H” was established in downtown Tel Aviv in 2013 by kibbutznik Timer Goren and a group of friends, hi-tech professionals, and entrepreneurs. On the palate, Classic Cask is pleasantly malty, with mild sweetness and some toastiness.

Milk & Honey Elements Sherry Cask Single Malt Whisky is the first single malt in which a portion was aged in kosher sherry casks. Like the Classic Cask, it’s bottled at 46% ABV (92 proof).

Milk & Honey Elements Peated Single Malt Whisky is Classic Cask, with a portion of the whisky (41%, according to M&H) matured inside of ex-Islay scotch casks. The rest of the whisky was matured in the usual combination of ex-bourbon, virgin oak, and STR casks.

Legends partnered with consultant and master distiller Stephen Gould of Colorado’s Golden Moon Distillery. Branding includes a wagon wheel, an unmistakable symbol of early Americans’ drive to cultivate their new country, resting upon the trunk of an olive tree, an ancient symbol of perseverance and gritty determination.

Former legal eagle and another immigrant from Montreal, Yechiel Luterman, is owner and distiller at the Edrei Distillery. made with local water and from various barley strains of indigenous wild barley growing in the fields of the Golan Heights plateau, his whiskey is “ A true product of the Land of Israel.”

Diddy Took Us All The Way Back With His Hits During His BET Awards Performance…With Tons Of Special Guests!
Book Riot’s Deals of the Day for June 29, 2022
Detroit Mom Charged With Murder Of 3-Year-Old Blind Son Found Stuffed In Freezer
Former President Obama Speaks On Roe v. Wade
Viritech Apricale is a Hydrogen HyperCar with Bugatti-like Speed