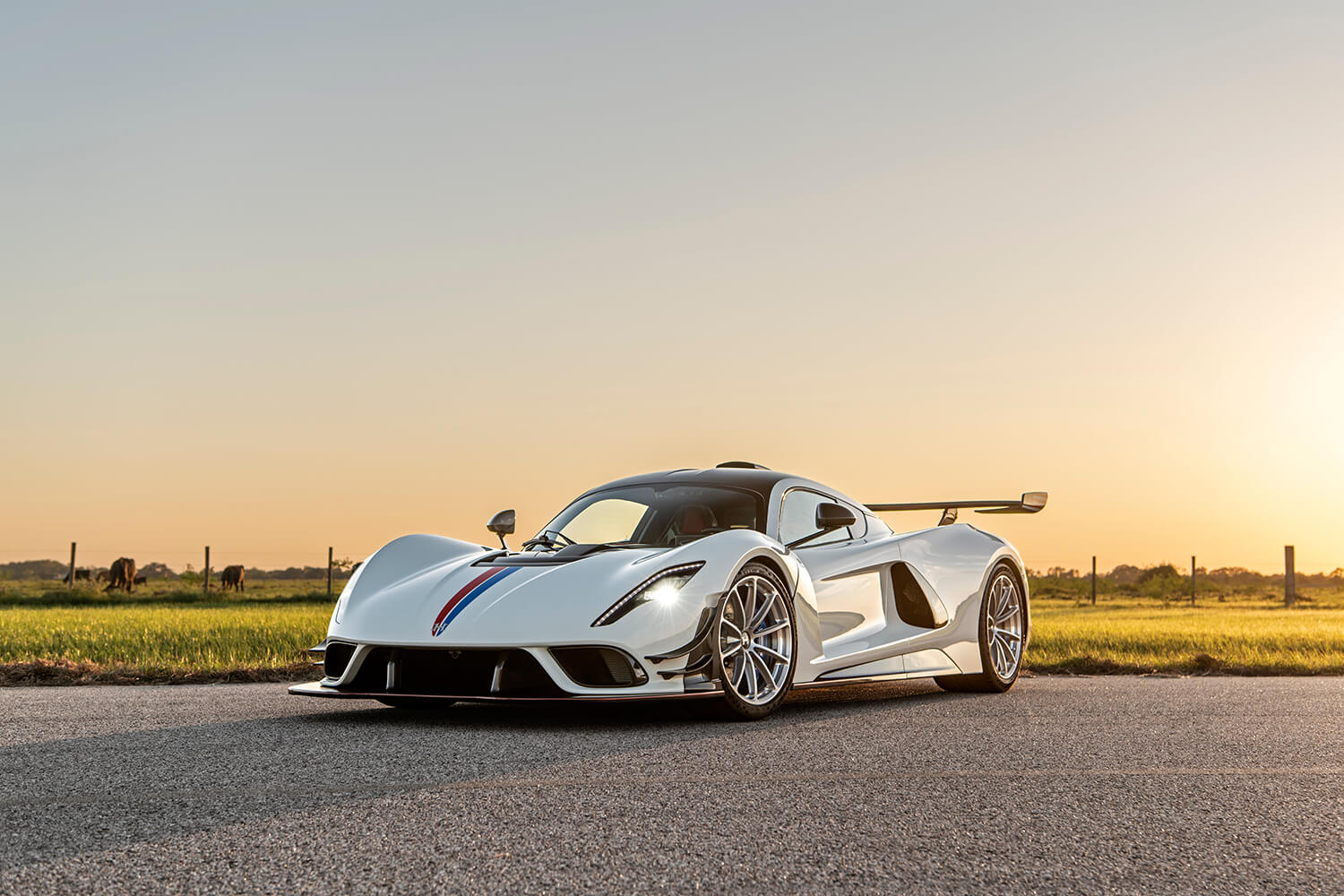 Track focused hypercars represent a new breed of bespoke creations designed for a singular purpose of extreme performance. Hennessey is one name that springs to mind when you think of fast cars and its newest iteration of the Venom F5 turns the volume right up. The new Venom F5 Revolution Coupe is the most powerful pure-combustion hypercar in the world. The Venom F5 Revolution Coupe is based on the Hennessey Venom F5 Coupe but gets reworked aerodynamics, suspension, engine cooling, and digital telemetry. The engineering team of Hennessey also aims on reducing mass. Thanks to a systematic focus on weight reduction, the race-focused model weighs below 3,000 pounds, which makes it the lightest Venom F5 model. 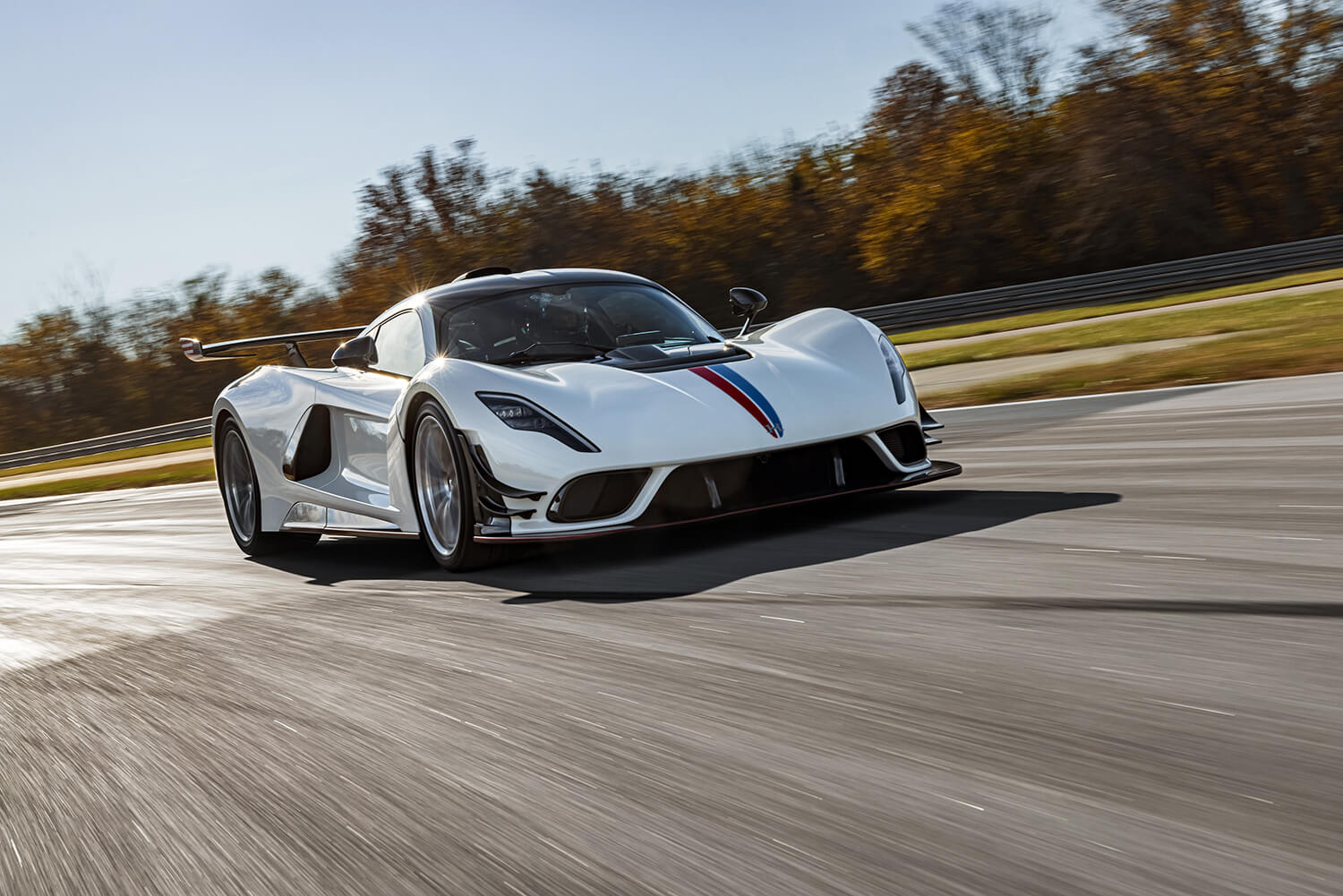 Like other Venom F5 models, mid-mounted in the carbon-fiber monocoque chassis is Hennessey’s twin-turbocharged, 6.6-liter, ‘Fury’ V8 engine producing 1,817 bhp. Power is sent to the rear wheels through a automated single-clutch gearbox, which has been tuned for track use. Carbon-ceramic brakes are fitted as standard and feature multi-piston callipers ensuring fade-free stopping power on the road or circuit. Design wise, the full-width rear-mounted carbon fiber wing dominates the look but has aerodynamic properties too. The adjustable appendage (that allows the owner to adjust the angle of attack through a range of degrees) is fitted with end plates that stop the high-pressure air on top of the wing from spilling underneath – increasing downforce without extending the width of the wing. The end plates also generate vortexes that guide airflow and improve aerodynamics and stability. As a result, the rear wing delivers more than 800 pounds of downforce at 186 mph (300 km/h) and over 1,400 pounds of downforce at 249 mph (400 km/h).

A significantly larger front splitter, crafted from carbon fiber, complements the rear-mounted wing and rear diffuser. The front splitter prevents air from flowing under the F5 Revolution Coupe, which creates a low-pressure vortex beneath the vehicle (aiding downforce). At the same time, the extended rear diffuser guides air out from the hyper car’s smooth underbelly. Dive planes, positioned on the front fascia in front of the wheels, aggressively channel airflow to shift the aerodynamic balance forward – adding grip to improve turn-in. In addition, the Revolution features a new roof-mounted central air scoop that delivers fresh cool air to the F5’s engine bay, which effectively helps lower component temperatures.

Venom F5 Revolution owners are also offered a digital on-board track telemetry system capable of measuring an array of data points. These include lap times, splits, cornering G-forces, and more. The system allows the driver to monitor the telemetry in real time, or the data may be saved for later analysis or archiving.

Priced at $2.7 million and limited to just 24 units, the Venom F5 Revolution is one of the most exclusive hyper cars in the world right now.