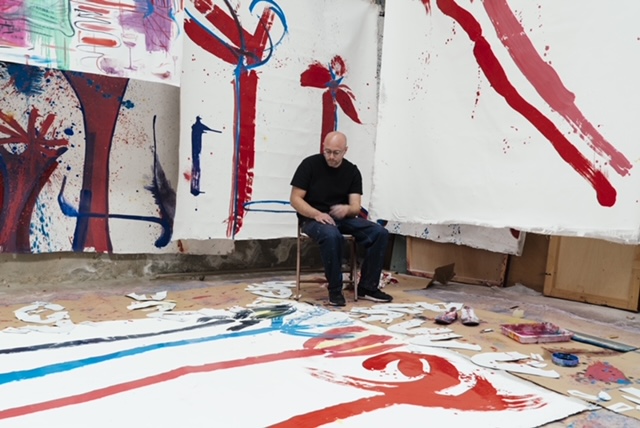 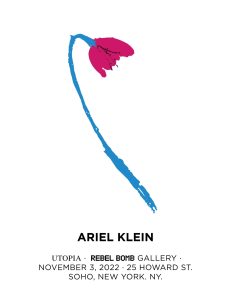 Rebel Bomb Gallery proudly presents new works by Ariel Klein in an edgy, avant-garde exhibition. Join the artist and Rebel Bomb creator Alejandro Meneses, on a journey to Utopia: A Refuge in the Universe on November 3, from 6:30-10:00 pm at 25 Howard Street, New York. The show continues through the month of November.

In Utopia: A Refuge in the Universe, visual artist Ariel Klein transports us to a place after humankind has fled their home planet. The exhibition imagines earthlings guided by an eternal sense of optimism and an instinct for survival. This utopian landscape is a journey into a vibrant world, with just the right balance to sustain life. Among its images are towering flowers painted in broad brushstrokes set off by a brisk atmospheric spray. The flowers sway or explode into deep rainbows, within cityscapes composed of an array of buildings, parks, bars and blocks of color. Water here is reimagined as molecules stenciled in hazy tones, accessible to make life possible. We see these works as a gateway to the future, a testament that our imagination can carry us to an inner utopia beyond our dreams.

Ariel Klein
Ariel Klein is an emerging artist whose paintings combine inventive abstract and figurative images, with whimsical graffiti. His portfolio includes portraits, murals, and projects across genres and in cooperation with other artists.

Klein won Maryland state accolades and scholarships to the Maryland Institute College of Art (BFA 2012). His undergraduate studies included a year at the Fine Arts School of the Universidad Complutense in Madrid. 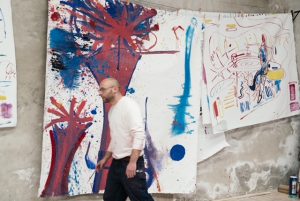 His career took off with a well-received solo show at the Purple Coconut, a pop-up gallery he managed in urban Silver Spring, MD (2013), where he also promoted musical talent in the Washington, DC metro area. He worked as a set painter for GALA Hispanic Theater in Washington, where he exhibited a series of Spanish-themed paintings.

In 2014 Klein was named artist-in-residence at Strathmore, a performance venue in Bethesda, Maryland. During the year-long fellowship he shadowed “The President’s Own” United States Marine Band and painted portraits of this acclaimed national cultural icon. Several of these works remain in the Marine Barracks in Washington, where the musicians rehearse.

After a year of graduate studies at the School of the Art Institute of Chicago, Klein was hired by the James J. Peters Veteran’s Hospital in the Bronx, NY and Columbia University Presbyterian Hospital to create natural looking facial prostheses. What he learned on the job – use of specialized lathes, hand pieces, casting and compression-molding machinery – helped him expand his artistic vision on paper, canvas and wood in his then studio in Manhattan’s Inwood neighborhood.

Following George Floyd’s murder in 2020 Klein was among a group of artists who transformed plywood covered storefronts into giant murals. When he moved to North Adams, Massachusetts, that same year, he mounted Rise Up: Urban Protest Art with selected works from that period at the Eclipse Mill in North Adams. 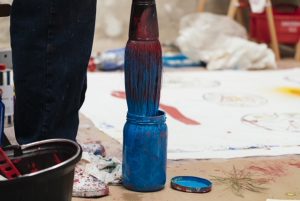 Recently, Klein is known for his series of portraits of well-known rap artists. In collaboration with icon artist Susan Kelly von Medicus, Klein painted El Trainn at the center of a Byzantine style icon. Ola Runt’s likeness appears on a ceramic Greek Amphora, and Sauce Walka is painted as a samurai in the style of Japanese printmaker Mori Yoshitoshi.

All three works are in the musicians’ collections.

Klein’s latest work is the subject of the exhibition Utopia: A Refuge in the Universe. In it he explores themes of utopia with immense flowers and futuristic cityscapes saturated in vibrant colors. As the artist worked out this vision from a studio in Madrid last spring, Rebel Bomb CEO, Alejandro Meneses flew in leather pieces for sixteen pairs of shoes to catch serendipitous drips and swishes of paint for a Rebel Bomb exclusive shoe line.

Klein often applies unconventional techniques to oil painting. In his new works he paints with a Chinese ink brush the size of mop, maneuvered on a long pole. “Working with stencils and a mechanical sprayer allows me to get an atomized effect on canvas,” he said. 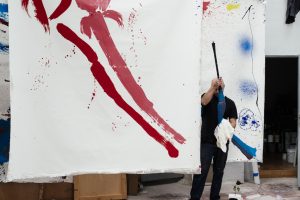 Klein’s work appears on album covers, and on skateboards commissioned by Bureau Skate Shop in Washington, DC, which also hosted Caressing the Asphalt (2018), a solo show of his skateboard drawings. He has exhibited in New York, Baltimore, Washington, DC, Bethesda, Maryland, Wilmington, Delaware and China. His works are also in private collections in the United States and in Spain. Klein is represented by Rebel Bomb CEO Alejandro Meneses.