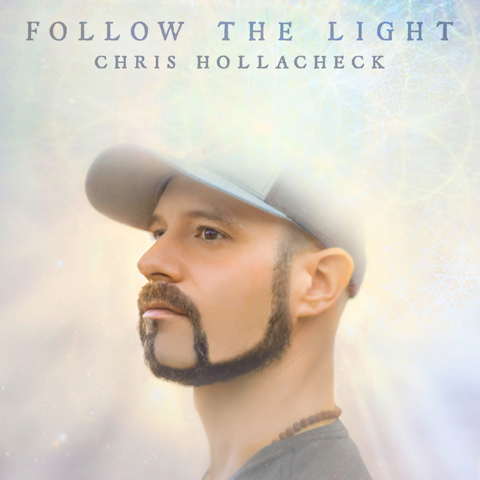 Some people look up at the moon at night

Some people light a candle in the dark

Some people wish on a shooting star

Whatever you use to make your journey right

Drown out the darkness by shining it bright

Whatever fills your shadow, indigo or white

You might see red if you’re learning to trust

You might see green if it’s hard to love

You might see yellow if you can’t say no

Whatever resonates and feels right

So if you’re lost and wondering which direction to go

If you wanna find peace in the fight

Born in New Bern, NC and raised down a 7 mile dirt road deep in the woods, Chris Hollacheck grew up in the kind of setting you’d picture being in a country song. His musical journey started very early when he learned cello at 3 years old! Chris has also played piano, trumpet, baritone, and bass guitar and performed singing and acting in numerous plays all before the age of 18. After graduating high school, he picked up guitar in college at the University of North Carolina Wilmington. It was there that he discovered his passion for songwriting and singing country music. Once he graduated college, he moved to Nashville in 2014.

After a couple years of playing open mics and writer rounds and working odd jobs, Chris decided to leave Nashville and travel the country. He started venturing in Florida and then Texas, where he played more frequent shows and gained a diverse group of fans. During this time, he released his first radio single “Knotty Thing” in January 2019.

After 2 years in Texas, he decided to move back to Nashville where he ended up taking his music further.

15 Short Graphic Novels For When You Lack The Time To Read
4 books to give to bibliophiles
Find Out Who Won Season 31 of Dancing With the Stars
Kim Kardashian’s SKIMS Goes on Sale Twice a Year: Don’t Miss the Deals
Why is Writing Stuck in the Paper Age?