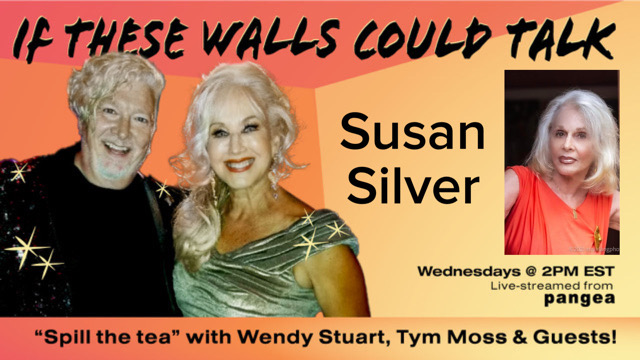 Who else but hosts Wendy Stuart and Tym Moss could “spill the tea” on their weekly show “If These Walls Could Talk” live from Pangea Restaurant on the Lower Eastside of NYC, with their unique style of honest, and emotional interviews, sharing the fascinating backstory of celebrities, entertainers, recording artists, writers and artists and bringing their audience along for a fantastic ride.

Susan Silver will be a featured guest on “If These Walls Could Talk” with hosts Wendy Stuart and Tym Moss on Wednesday, September 14th, 2022 at 2 PM ET live from the infamous Pangea Restaurant.

Wendy Stuart is an author, celebrity interviewer, model, filmmaker and along with If These Walls Could Talk she hosts TriVersity Talk, a weekly web series with featured guests discussing their lives, activism and pressing issues in the LGBTQ Community. 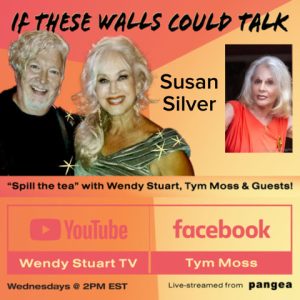 Susan Silver was one of the original writers of The Mary Tyler Moore Show, The Bob Newhart Show, Maude and many other sit-coms. She wrote two Top Ten Movies of the Week, feature films and pilots for her own sit-coms.
She has appeared on TV talk shows such as Fox Good Day NY (5) , The Today Show (3), is a frequent radio guest on Boomer issues for the Growing Bolder radio program, Bill Bennett Show and others. She has a long running radio commentary on the NPR affiliate out of Connecticut called “Susan Says” on www.Robinhoodradio.com and iTunes.

Profiled in TV Guide, Esquire and other publications, she has written OP-Ed pieces for The New York Times, articles for Los Angeles Magazine, Refinery 29 and had a long running column on newyorksocialdiary.com entitled “The Search For Mr. Adequate.”

In a second career, she worked in Holocaust related organizations such as the Anti Defamation League, running their Speakers Bureau, and as a UN Observer for the Simon Wiesenthal Center.
The New York Sun calls her “The Voice for those past the Sex and the City bracket.” Her memoir, “Hot Pants in Hollywood: Sex, Secrets & Sitcoms was published in 2017.

Watch Susan Silver on “If These Walls Could Talk” with hosts Wendy Stuart and Tym Moss on YouTube here:

Subscribe and listen to “If These Walls Could Talk” on Apple Podcasts/iTunes here: