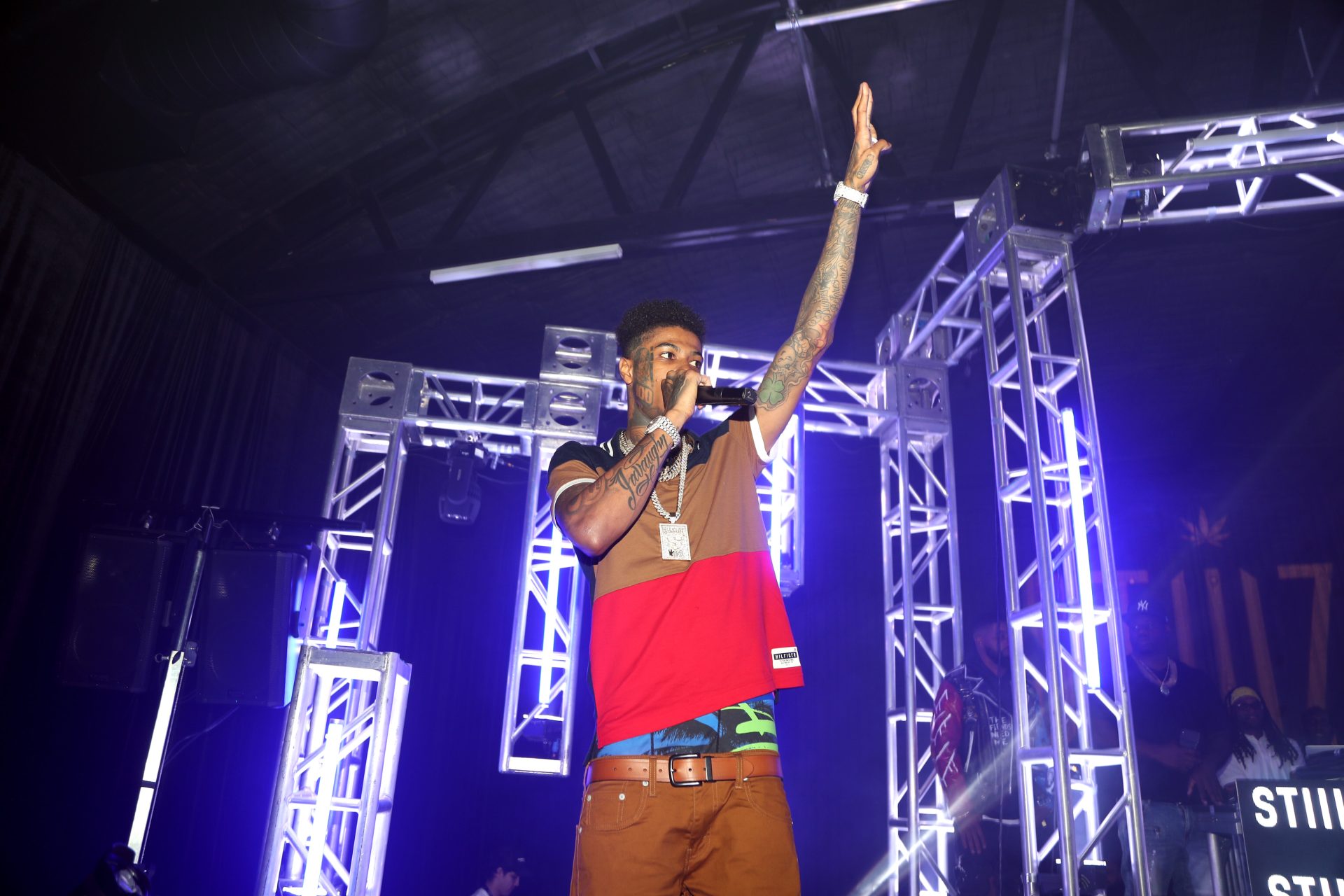 
And the family feud continues. Nearly two days later, the drama hasn’t died down between Blueface, his mother, sister, and Chrisean Rock. As previously reported, all parties involved took to social media to give their perspectives of two physical altercations between Chrisean and his mother and later between Chrisean and Kali. Though Karlissa and Kali initially accused Blueface of the beatings, Chrisean admitted to putting the paws on Blueface’s family in a video filmed late Saturday night by the Thotiana rapper.

On Sunday, Blueface hopped on Twitter with commentary on the fight and an uncomfortable suggestion about his mother. Chrisean Rock doubled back with an eviction notice for Karlissa and her husband, a reminder of the beatdown, and a threat to call CPS.

“Imagine saying you got jumped [and] a viral video up of you getting beat up by one person,” Blueface tweeted.

Then, Blueface posted a video of him and Jaidyn Alexis, the mother of his son and unborn daughter. He wrote, “my mother does this with every female pregnant and all.” The video, dated February 18, shows Jaidyn and Blueface having a daytime meal outside of Blueface’s restaurant, where Karlissa works. The soundless video shows his mother with her head cocked and pointing her finger at Jaidyn.

Jaidyn then says something to Karlissa, prompting Karlissa to swipe all of the food on the table to the ground in assumed anger. Karlissa then heads inside the restaurant as Jaidyn tosses the rest of the food from the table. Jaidyn stands up to face Karlissa, but Blueface pulls her away from the restaurant door. He wrote, “then play victim”  in a follow-up tweet: “It’s giving my mom wanna be my girlfriend or some.”

It’s giving my mom wanna be my girlfriend or some 🤮

Afterward, he retweeted a comment on his page, saying, “rock rock was ur mama karma.”

After Blueface shared the video, Jaidyn made it clear she wants no parts, calling the family vs. girlfriend drama “Boosie activities.”

“When people was running they mouth bout me no footage was released coming to my rescue bout who right n who wrong don’t try to make anyone look better or worse,” Jaidyn wrote on Insta Story. “I took that sh*t to da chin & stood on my 10 about myself. The last couple months been filled w Boosie acitivies not just the last couple days on ALL PARTS. Idk why anyone acting surprised about anything to keep it a buck.”

Meanwhile, Karlissa took to her ‘gram to offer some clarity on the video. She wrote, “I’m just grateful the truth came out that I never hit her or threw nothing at her.” Karlissa then pointed her message at her son saying, “I don’t get into it with your women they take you out on me but now that I’m not in your life to blame we will see who they take it out on.”

She also challenged her son to post the audio of the clip in an Insta post-and-delete. Karlissa expressed that she hasn’t had issues with other women in Blueface’s life and shared that Jaidyn disrespected her on a phone call.

“You will not sit there and call me out my name on the 2-way call with your mother and then eat the food I made. You darn right I threw my food on the floor because you will not disrespect me on my job,” Karlissa wrote.

Chrisean is now back on Instagram, but all of her online static for Blueface’s mother and sister came on Twitter. The rising artist didn’t mince her words as she shared her side of footage that shows her punching Kali outside of Blueface’s home on Saturday.

“Why talk sh*t knowing u threw glass jars at my face n called my mom a dope fine n got in my face like I won’t put u down nobody happy to put they hands on somebody moma, but I’m not a b***h so be careful,” Chrisean tweeted.

Chrisean shared that Kali approached her while in a team setting, “watching film after practice.” So, Chrisean says she “dropped” Kali. At this point, Chrisean said Kali’s husband pulled her hair and hit her in the face so the fight was moved outdoors.

Then yo daughter ruined my team bonding walking up on me while I’m watching film after practice… she walk up I dropped her n then her husband pulled my hair n hit on the side of my face then we took it out side I whooped u till u peed on ya self.

Chrisean also tweeted her disappointment that her team witnessed the altercation. She wrote, “They didn’t nor did I deserve that weird disrespectful stuff.” Chrisean suggested she should sue the family, but said they have no money. Then, she took aim at Karlissa, more specifically her child whom she says is on an oxygen tank.

I was more worried about my concerned about ya new born child that on a oxygen tank n ya other innocent child so what happened if y’all would have went to jail or lost y’all life they was gon be with out parents because both of y’all do destructive dum shit.

The back-and-forth lasted through Sunday and Chrisean had additional words late into the night for the mother and daughter. First, she clarified that she wasn’t talking about Kali’s kids. Apparently, her intention was to help Kali visualize what could’ve happened if the parents died or went to jail after inciting a fight.

Then, Chrisean leaned into her girlfriend status and tweeted an eviction notice for Blueface’s mother.

“Karlissa u need to figure out where u going cuz u can’t stay no more n Janice figure out how u gon fix yo man mouth cuz I know bro don’t wan walk around with just gums. Karlissa go move in with Janice so y’all can be unhappy over there together,” Chrisean wrote.

Meanwhile, Wack 100 shared a video of Kali and her husband following the altercation. Kali is sitting in her brother’s driveway with her husband’s head in her lap. He appears to be unconscious as Kali seemingly checks his mouth and rubs his head. His pants are pulled below his bottom, exposing his boxers. Splashes of blood appear near his legs on the cement driveway. Kali exchanges words with someone behind the camera.

Real Housewives of Atlanta Season 14’s Most OMG Moments
“Outgrowing Ourselves” by B.B. Cole
(Exclusive) Lil Uzi Didn’t “Intentionally” Aim At Woman Alleging She Was Injured By Cell Phone He Threw At Wireless Fest Source Says
27 Super Juicy Menswear Deals from the Best July 4th Sales
Austin Butler and Ezra Miller Did Not Get in Tokyo Bar Fight, Despite Reports