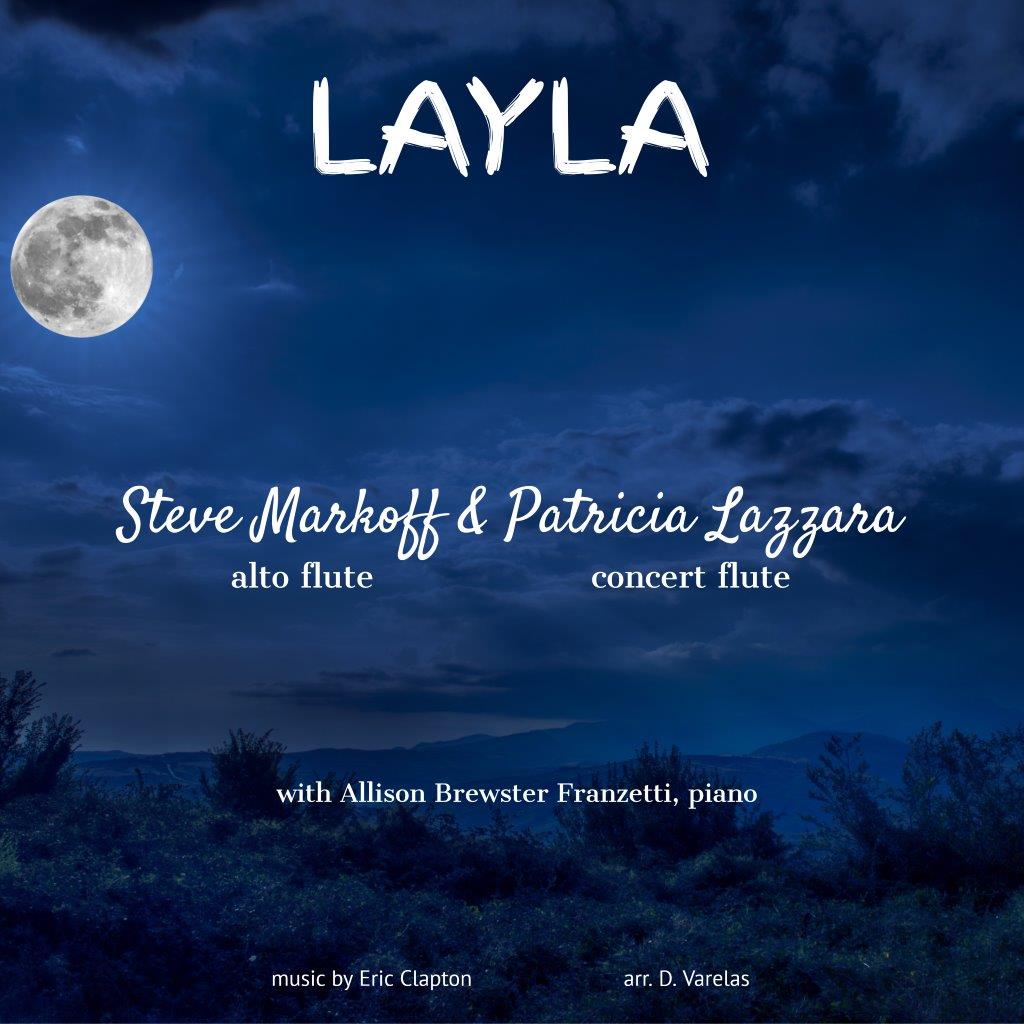 Steve Markoff and Patricia Lazzara continue building a reputation as one of the pre-eminent instrumental interpreters of popular songs emerging in recent years. Their new single “Layla” doesn’t look back to the original Derek and the Dominos version full of soaring lead guitar and a full rock band performance. Instead, the alto and concert flutist cover Eric Clapton’s later reinterpretation of his song for his early 1990s Unplugged release. It’s an astute choice allowing the duo, plus pianist Allison Brewster Franzetti, to explore their jazzier inclinations and flex their imaginative muscles.

They expend an appreciable amount of effort remaining faithful to Clapton’s original. The pace is an almost note-perfect recreation of the older version. Franzetti’s piano carries the song’s main riff and her unwavering timing provides a solid foundation for the flutists to work over. Many listeners will especially enjoy the track thanks to the vibrant mix; each instrument stands out without anyone overshadowing the other.

Lazzara and Markoff trade solos throughout the song. There’s a clear difference in the sound of their instruments, but they share an obvious common ground that allows them to dovetail their contributions into one another. Dmitriy Varelas once again supplies the arranging for this track and deserves plaudits for providing the trio with an ideal forum for highlighting their talents. Attempting a cover like this, in the hands of lesser talents, could fall apart and produce nothing more than glorified elevator music.

It’s clear they are aiming higher. Markoff, Franzetti, and Lazzara’s collaboration results in a work that proves, if listeners require further evidence, that distinctions such as genre are arbitrary. Musical excellence tends to reduce such distinctions to rubble as its multilingual talents translate good songwriting into countless languages.

It also isn’t particularly common for three musicians to pull off recordings where they stand out as individual musicians and a collective. The production and mixing help, as mentioned earlier, but listening is the key. Lazzara, Markoff, and Franzetti are keyed into what their musical counterpart is offering, careful to never step on toes, and always ready to respond in kind. It’s as perfect of a synthesis between three musicians as you are likely to find in the modern music world.

There’s likely more audacious choices ahead of the three. Their preceding albums have made much of their impact thanks to the daring that Manzetti, Lazzara, and Markoff show on a regular basis. This is a musical unit unafraid of taking chances and their musical chops are no impediment obstructing or blocking their connection to listeners. The instrumental fireworks are real, as well, and invite repeated listens.

A flute-driven version of “Layla” won’t make you forget its much more famous counterpart, but there’s no doubt that the musicians involved harbor immense respect for the original without ever attempting to match or imitate it. They’ve achieved something that uniquely exists in two worlds – it’s an expertly delivered rendition of one of rock music’s crown jewels in an unique setting and an individual statement of artistic and music prowess

The music of Steve Markoff and Patricia Lazzara has been heard all over the world in partnership with the radio plugging services offered by Musik and Film Radio Promotions Division.  Learn more https://musikandfilm.com