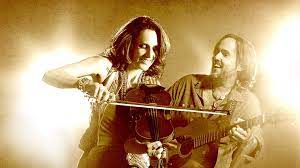 Slow-churning emotional unrest in “How Did You Get in My Heart.” A bucolic sunset imagined in sonic terms for “What a Lovely Day.” Purist romance of the most virginal variety in the single-worthy “When We’re Together.” These three original songs would have been enough to get some positive feedback out of this critic for Bettman & Halpin’s new album Timeless, but when combined with the additional eleven songs – all of them classics from the American songbook – this record feels like something of a watershed for the act. It isn’t easy to make some of these tracks feel fresh, but under the command of these players, the task seems to be rather simple from start to finish (not to mention quite rewarding to the listener).

There’s just as much fervor behind the strings of “All of Me” and “Accentuate the Positive” as there is in the original track “What a Lovely Day,” and I think that when examining the aesthetical roots of every composition on this LP, there’s no disputing the sense of continuity that all of the material has. Nothing sounds forced into place or made to sit with the other songs in an awkward manner; if anything, it feels like this content was always meant to share the same tracklist, developing much more than a simple theme as we get into the guts of the record. Bettman & Halpin know how to pick their compositions, and the former’s composing of the other songs here really meshes well with the overall motif.

Although I love what the lead vocal accomplishes in a lot of these tracks, the string play feels like the real star of Timeless, especially in “It Don’t Mean a Thing,” “Summertime,” and “Blue Skies.” “It’s Only a Paper Moon” is actually rather conservative in comparison to what it could have been with just a bit more indulgence on the part of these musicians, but their lack of interest in excess is an admirable one from where I stand. To me, it seems that Bettman & Halpin have as much desire to be known for their straightforwardness as they undoubtedly will be their passion in this release, which is why there aren’t quite as many bells and whistles as there could have been in this mix.

Fans of jazz, folk music and indie pop the same are going to find Timeless to be a lot of fun and an inspired trip down memory lane, and even if it doesn’t challenge the mainstream standard enough to break any new ground, this record from Bettman & Halpin should be something that puts their brand on the map in a lot of discerning circles around the country. Making this sort of a project without having to recycle elements of past works from other artists must have been a bit of a pain all things considered, but if we’re putting this side by side with the big-name releases in 2022, you can’t argue against the high-value output Bettman & Halpin have to offer.