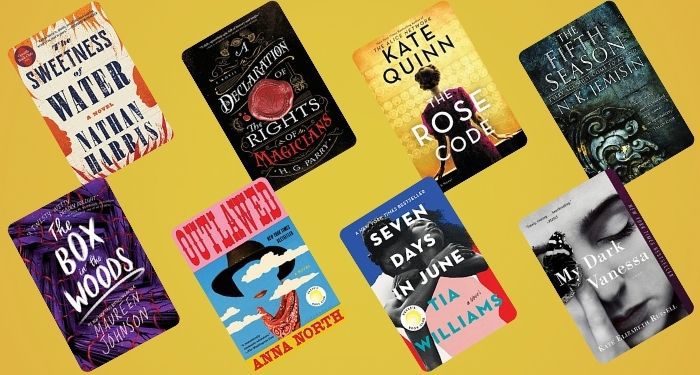 The Priory of the Orange Tree by Samantha Shannon for $2.99

Kitchen Confidential: Adventures in the Culinary Underbelly by Anthony Bourdain for $2.99

Patron Saints of Nothing by Randy Ribay for $2.99

A Desolation Called Peace by Arkady Martine for $2.99

Lore by Alexandra Bracken for $3.99

All You Can Ever Know by Nicole Chung for $1.99

The Whispering House by Elizabeth Brooks for $1.99

Children of Virtue and Vengeance by Tomi Adeyemi for $2.99

Witch Please by Ann Aguirre for $1.99

Every Heart a Doorway by Seanan McGuire for $4.99

Gingerbread by Helen Oyeyemi for $1.99

Bitter Orange by Claire Fuller for $2.99

The Survivors by Jane Harper for $3.99

Firekeeper’s Daughter by Angeline Boulley for $2.99

The Beautiful Ones by Silvia Moreno-Garcia for $2.99

Good Omens by Neil Gaiman and Terry Pratchett for $2.99

Harrow the Ninth by Tamsyn Muir for $2.99

Ariadne by Jennifer Saint for $3.99

Fifteen Hundred Miles from the Sun by Johnny Garza Villa for $3.99

Still Lives by Maria Hummel for $1.99

The Last Train to Key West by Chanel Cleeton for $2.99

To Be Taught, If Fortunate by Becky Chambers for $1.99

Silent in the Grave by Deanna Raybourn by $1.99

The Electric Hotel by Dominic Smith for $1.99

Empire of Wild by Cherie Dimaline for $1.99

Mongrels by Stephen Graham Jones for $1.99

When Women Were Birds by Terry Tempest Williams for $3.99

The House on Vesper Sands by Paraic O’Donnell for $2.99

The Book of Lost and Found by Lucy Foley for $4.99