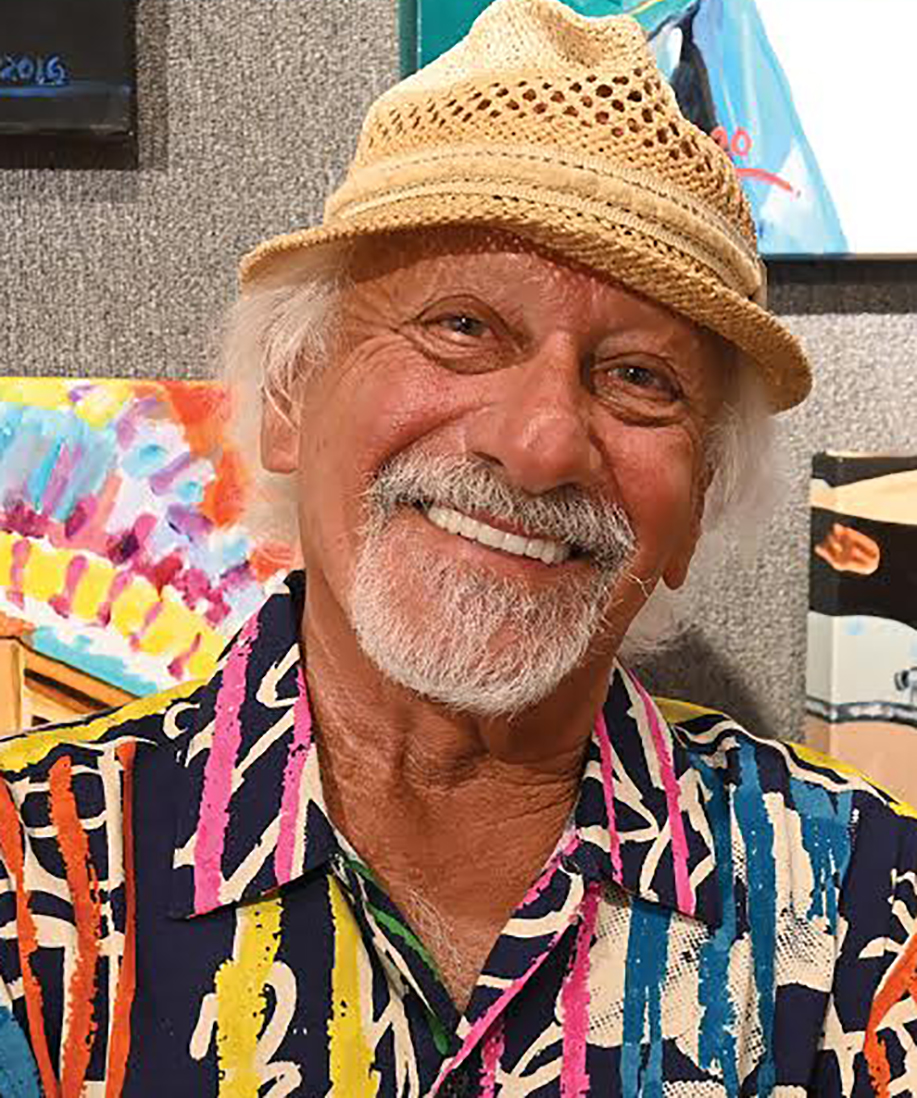 It is not always the sunshine that spreads the seed. Darkness makes the heart’s case fragile, pain breaks it open, courage teases us, and life unfurls and expands….while our future is not fully unwrapped, iconic artist Ruby Mazur is celebrating the sunshine after vanquishing cancer and selling his first “Mouth and Tongue” NFT for 1.1 million dollars via Cosmic Wire. 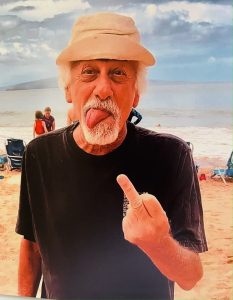 Gazing through nearly 5 decades, the entire planet has been mesmerized by the artistic passion of Ruby Mazur as his art has been displayed in galleries globally. His innovative and influential artistry has appeared on over 3000 album covers including that of Elton John, Jimmy Buffett, Jim Croce, B.B. King, Van Morrison, Ray Charles, Billy Joel, and countless others. However, one of the most compelling designs was the “Mouth and Tongue” created for The Rolling Stones “Tumbling Dice”, now celebrating its 50th anniversary.

Tragically, a year ago Ruby learned that he only had 6 months to live because he had acquired brain cancer. Fearing that the end was near Ruby decided to launch an art extravaganza to mark the 50th “Mouth and Tongue” anniversary and leave this world in an uproarious blaze of glory. However, through the efforts of a miraculous acupuncturist, Ruby is now joyfully in remission and what was to be his final exhibit became the first hybrid Canvas and NFT art show in Hawaiian history. Through the production efforts of the visionaries at Holle Fine Art Gallery and Cosmic Wire, the NFTs were displayed side by side their Canvas counterparts, all as individual one-off works of art featuring Ruby’s lips while tributing iconic pop culture. On the very first night of the exhibit Ruby Mazur sold his NFT for 1.1 million dollars becoming one of the highest priced NFTs sold.

Ruby is going to auction off his other 12 originals and will be donating a portion of the proceeds to the Let Me Help, Inc. Foundation to fund further cancer research.

I spoke to Ruby Mazur from his home resting on the side of the dormant Haleakalā Volcano in Maui regarding his unquestionable destiny and artwork unchallenged by angel, man or beast……

You invented the “Mouth and Tongue” so how did The Rolling Stones get a hold of it?

There’s A lot of controversy through all the years that Andy Warhol did it, Craig Braun did it, that I did it…. All I know is at the end of 1970 Mick had brought me into the recording studio while I was living in Los Angeles. They were recording at Sunset Sound Recording Studio. They were doing “Tumbling Dice.” He wanted me to come up with some artwork that looked like him, but didn’t look like him. I wasn’t quite sure if it was going to be their logo, or on the record sleeve but anyway I had created the artwork that he originally used, which didn’t get released until 1971 on the “Tumbling Dice” record sleeve. 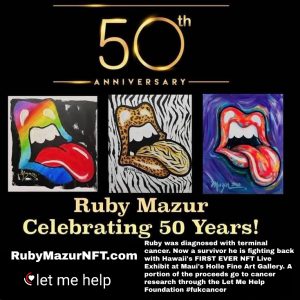 What made you decide to hold this exhibition?

So, it’s been 50 years, and I guess you’ve heard that last year I was diagnosed with brain cancer. I wanted to put this final exhibition together of all of my “Mouth and Tongue” paintings because I was given six months to live. That’s how I hooked up with The Holle Fine Art Gallery and Cosmic Wire to do my last final exhibition.

It’s gone. They couldn’t even do the surgery because there were so many blood vessels surrounding the tumor. So, I found this world-renowned acupuncturist living only 10 minutes away from me, and I went to the beach every day and meditated. He asked me if I wanted to live and I told him “yes that I was not ready to go yet.” He worked on me for six weeks at which point I went back to get my MRI and I got a call from the neurosurgeon telling me the tumor was gone.

It’s so crazy. Everyday it’s like my birthday. Who knows it could have been brain power, positive thinking, energy from another source, I don’t know.

How did you find out about NFTs?

It’s funny because I was putting this exhibition together and this Broadway producer, a buddy of mine, told me about a friend of his that was doing NFTs. I had no clue what an NFT was. So I started to research it but I am old school. Then my nephew approached me with someone who wanted to connect with me because it was the 50th anniversary, and his company did NFTs. So there I was hearing it again, and I was thinking “what the hell is an NFT”? So, I decided to give it a shot. We wound up going back-and-forth with the lawyers and it really got to be a royal pain in the ass. So, I decided to forget about it. Then someone suggested that I speak with Jerad Finck at Cosmic Wire. I said OK because I really wanted this exhibition to not only be an exhibition but something really special. If it was going to be my last one, I wanted to go out in a blaze. I spoke to Jerad and to me he was a creative genius doing his kind of thing. So, within two days we had our contract signed and he started working and putting everything together. Then when he showed me what he did with my painting by making them into NFTs ….I looked at it and said “ Holy crap, my paintings were coming alive.” It was a whole new world. You have to see what they did with them…it’s just incredible. I got so excited because now I finally got it. It was very, very cool. So, my exhibition was on July 2. They all flew out to Maui, and that first night somebody bought one of them for $1.1 million dollars. 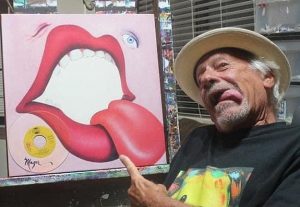 Where you in shock?

I’m still in shock! I keep saying that this had to be one nut job in a million, but Jerad says “wait and see.” The bidding for the others started Saturday.

You have done so many album covers for so many iconic rockers. Do you have a favorite one, or a favorite rocker?

Elton John, and we have been friends since 1970 when I did his first American album for the soundtrack of the movie “Friends.” I met him and Bernie back then and he was so humble. He was just becoming Elton John. Then a couple of years ago he was going to be performing here on Maui at the Maui Arts and Cultural Center so I decided to get a hold of his manager to see if I could come backstage to see Elton. Two days before the concert I received an email from his manager saying that Elton would love to see me and to please join him for dinner backstage before the concert. So, I had this giant print made of the album cover and I went backstage and he was so gracious and so humble. Eileen, he remembered our conversation in 1970 about what I wanted to do in designing the cover. I was blown away! I gave him the large print of the cover and he was so happy that I gave that to him and he said “you know Ruby that was not just a great album cover but such a great album and it never got recognized like I hoped it would.” I totally agreed with him, the music was phenomenal. We spent the evening together and then when I was leaving, he told me that he had a seat for me in the front row. I couldn’t believe it. He is such a nice guy. Him and Jimmy Buffett are my favorites that I have done covers for that I am still friends with. Jimmy is the same way…….. 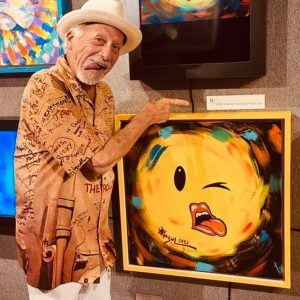 For more information on the Ruby Mazur NFTs, go to https://www.rubymazurnft.com